ME Awareness: “I was training for the London Marathon, when I felt I’d got a virus that I couldn’t quite shift,” by Tracey Barraclough | 21 May 2020. 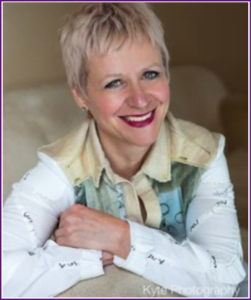 I see people out running and feel a twinge of jealousy. They don’t know how lucky they are, to feel the freedom and exhilaration. That used to be me.

I especially loved running in the rain, the water refreshing and cooling. I dream that one day I’ll run again.

In February 2018, I was diagnosed with Chronic Fatigue Syndrome (hate that name) or M.E. as it’s also known, which stands for myalgic encephalomyelitis.

M.E. is a complex multisystem neurological disease with a wide range of disabling symptoms.

It’s debilitating, unpredictable, and affects 265,000 people in the UK at a cost of over £3.3 billion to the economy.

Yet little seems to be known about this life-changing condition, and a scant amount of money is invested in to research.

Despite the relatively recent diagnosis, it was in 2008 when training for the London Marathon, that I first felt as if I’d got a virus that I couldn’t quite shift.

I took time out from exercise – I also had a passion for lifting weights – until I realised that I didn’t feel any better by resting and decided that I may as well just push through.

Besides, physical training helped me to cope with the overwhelming pressure that I felt as a single mum in business, and with no financial support.

Participating in sporting events gave me focus and helped mentally, and after the marathon my sights were set on a body-building competition, which was to be filmed for the BBC’s Inside Out programme.

By 2016 though, I felt significantly more unwell with the addition of a persistent cough and lower back ache. I was exhausted, tearful, and felt like I was dragging a concrete ball and chain around my ankles.

Repeated visits to my GP felt fruitless. Desperate for answers but not getting any, I underwent some tests, but the results were negative. The Doctor simply shrugged her shoulders and told me that there was nothing more that could be done.

“Stuff you then,” I thought. I obviously wasn’t being taken seriously. But, on 1 January 2017, when I felt glued to the bed and unable to move, I knew that something was very wrong indeed.

Eventually, I was diagnosed with malignant bowel cancer. However, when after surgery to remove the tumour, I wasn’t feeling any better, it was back to the GP. 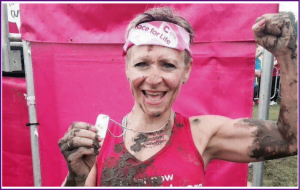 Again, my concerns fell on deaf ears, and the frustration nearly drove me mad. Clearly, they thought that it was all in my mind.

I begged to see an Immunologist. “And say what?” asked the locum GP abruptly.

Begrudgingly, I was referred, except the GP didn’t hold out much hope that the immunology department even existed anymore. Thank God it did!

They asked for a timeline of every significant life event. It went as far back as 1976, and my parents acrimonious divorce.

My body had taken a battering, physically, mentally, and emotionally. In short, they concluded I had probably burnt out. But my symptoms met the diagnostic criteria for M.E. and that’s where I am today.

It’s been a long two years coming to terms with M.E. and it’s still a work in progress. There’s been denial, grief, and now a sort of acceptance. Grieving for the life that I had and adapting to the one that I’ve got. 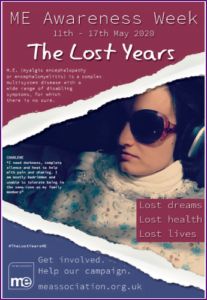 We have been featuring stories from people with M.E. every day throughout May.

My life has changed beyond recognition, and yet to the outside world it probably doesn’t look any different.

People tell me how well I look, and I thank them with a half-smile. If only I felt it. When I tell anyone that I’m living with a chronic illness, they look at me as if to say, “Yeah right, whatever.”

It seems that no-one really gets it, and less than a handful have asked how it actually impacts my life and that of my son’s. Some wonder if it’s, “that thing where you get tired.” I don’t know whether to laugh, cry or smack them.

This is like suggesting to someone with depression that they’re a bit fed up. Some friends seem to have airbrushed me out of their lives as I can’t socialise in the same way that I could before. It hurts.

Other friends have decided how I feel and don’t invite me to things because they think that I wouldn’t be up to it. With careful planning and pacing myself, I would be, if only I’d been asked. It’s lonely and isolating.

At any one time, I’m dealing with numerous symptoms; fatigue (unbearable exhaustion), heart palpitations, brain fog, insomnia, sensitivity to light, sound and temperature, irritability, overwhelm, headaches, and anxiety – to name but a few.

Some days I can’t get dressed until mid-afternoon, and the pinging of the microwave and phone notifications are enough to send me over the edge. Washing my hair is planned with military precision.

It’s like flu’s come to reside permanently in my body. Every single text, conversation, or bit of social media takes its toll. I have to rest a lot, and additionally, time spent in bed has to be at least 10-12 hours.

Little wonder that the ME Association report a lower quality of life than those with some forms of cancer. I can vouch for that. 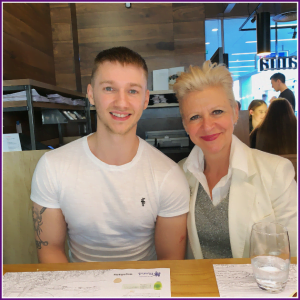 Tracey with her son, Josh.

M.E. is incurable, but sufferers can have periods of remission. Occasionally, I feel ‘normal’, but I still have to pace myself otherwise it’ll bite me on the backside. Hard.

On one of the worst days, my son had to remove the necklace that I was wearing, as I couldn’t lift my arms. There’s even been times when I’ve crawled up the stairs on my hands and knees or laid on the floor in a ball.

Many M.E. sufferers can’t even get out of bed. At least I’ve now got a life, and I’m grateful for that.

I consider myself to be mildly affected. I can work, can even manage the gym if I am careful, and I have dreams and goals again, but M.E. has slowed me down.

I am quietly determined, and I believe it is healthier. My body has made its mind up about how I should live my life and I have had to adapt.

Read the stories and announcements from ME Awareness Month.

Check out the MEA Media Toolkit for video, free factsheets, posters and graphics.

Just click the image opposite or visit our JustGiving page for one-off donations or to establish a regular payment. You can even establish your own fundraising event.

Or why not join the ME Association as a member and be part of our growing community? For a monthly (or annual) subscription you will also receive ME Essential – quite simply the best M.E. magazine!