People suffering from a debilitating and often discounted disease known as chronic fatigue syndrome may soon have something they’ve been seeking for decades: scientific proof of their ailment.

Researchers at the Stanford University School of Medicine have created a blood test that can flag the disease, which currently lacks a standard, reliable diagnostic test. 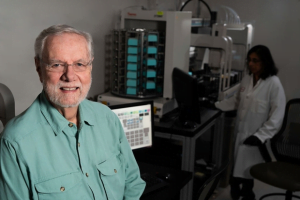 Ron Davis is the senior author of a paper that describes a blood test that may be able to identify chronic fatigue syndrome. Steve Fisch.

“Too often, this disease is categorized as imaginary,” said Ron Davis, PhD, professor of biochemistry and of genetics. When individuals with chronic fatigue syndrome seek help from a doctor, they may undergo a series of tests that check liver, kidney and heart function, as well as blood and immune cell counts, Davis said.

“All these different tests would normally guide the doctor toward one illness or another, but for chronic fatigue syndrome patients, the results all come back normal,” he said.

The problem, he said, is that they’re not looking deep enough. Now, Davis; Rahim Esfandyarpour, PhD, a former Stanford research associate; and their colleagues have devised a blood-based test that successfully identified participants in a study with chronic fatigue syndrome.

The diagnostic platform could even help identify possible drugs to treat chronic fatigue syndrome. By exposing the participants’ blood samples to drug candidates and rerunning the diagnostic test, the scientists could potentially see whether the drug improved the immune cells’ response. Already, the team is using the platform to screen for potential drugs they hope can help people with chronic fatigue syndrome down the line.

A paper describing the research findings was published online April 29 in the Proceedings of the National Academy of Sciences. Davis is the senior author. Esfandyarpour, who is now on the faculty of the University of California-Irvine, is the lead author.

“We chose to make sure that all the patients met all the criteria for all the different diagnostic tests for ME/CFS. We also required them to be seen by a specialist in ME/CFS and then to validate that they were convinced this person did have the disease.”

“It’s a very simple procedure. We simply take a blood sample. We remove the red cells and then put a drop of blood on the detector.”

“We will continue this work. What we were trying to do at the very beginning was distinguish ME/CFS patients from health controls. And the reason for that is to say, if you get a signal – you are not healthy – and we thought that was probably the most important thing we could do first.”

“The second phase is to try and figure out how to diagnose it is ME/CFS and not some other related disease. That’s going to take some time as we have to look through a large number of other diseases, but that is proceeding at the moment.”

“In the future we will use this device for a number of things. We are already using it for doing other types of diagnostics that don’t involve cells but in fact involve molecules.”

“The other thing that we can use this device for is to see if we can block the effects that we see in the nanoneedle assay with a drug. This then could be a drug that might have some benefit to the patients.”

“In the future we would like to set this assay to be much higher throughput. The device that you see behind me can do two samples at a time. We really need to increase that throughput.”

The diagnosis of chronic fatigue syndrome, when it actually is diagnosed, is based on symptoms — exhaustion, sensitivity to light and unexplained pain, among other things — and it comes only after other disease possibilities have been eliminated.

It is also known as myalgic encephalomyelitis and designated by the acronym ME/CFS. It’s estimated that 2 million people in the United States have chronic fatigue syndrome, but that’s a rough guess, Davis said, and it’s likely much higher.

For Davis, the quest to find scientific evidence of the malady is personal. It comes from a desire to help his son, who has suffered from ME/CFS for about a decade. In fact, it was a biological clue that Davis first spotted in his son that led him and Esfandyarpour to develop the new diagnostic tool. 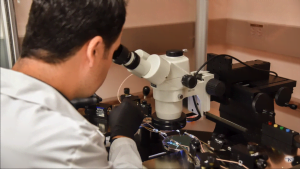 “The device that you see behind me can do two samples at a time. We really need to increase that throughput.” Dr Ron Davis. Open Medicine Foundation Video.

The approach, of which Esfandyarpour led the development, employs a “nanoelectronic assay,” which is a test that measures changes in miniscule amounts of energy as a proxy for the health of immune cells and blood plasma.

“Esfandyarpour and colleagues show that people with ME/CFS are different from healthy controls with regards to their blood samples’ electrical properties.”

“Excitingly, they appear to have discovered a distinguishing feature of ME/CFS, and one that can be measured simply and cheaply. Before this approach is tested clinically, however, three things will be needed.”

“First, results should be replicated in a second cohort of individuals. Second, the device should be tested whether it sets apart ME/CFS not just from general health but also from other disorders.”

“Finally, early indications that the device can distinguish severely- from moderately-affected people with ME/CFS need to be tested thoroughly.”

“These results also now narrow down the possible molecular and cellular causes of this devastating set of conditions.”

A big change is not a good thing; it’s a sign that the cells and plasma are flailing under stress and incapable of processing it properly. All of the blood samples from ME/CFS patients created a clear spike in the test, whereas those from healthy controls returned data that was on a relatively even keel.

“We don’t know exactly why the cells and plasma are acting this way, or even what they’re doing,” Davis said. “But there is scientific evidence that this disease is not a fabrication of a patient’s mind. We clearly see a difference in the way healthy and chronic fatigue syndrome immune cells process stress.”

Now, Esfandyarpour and Davis are expanding their work to confirm the findings in a larger cohort of participants. Recruitment for the larger project, which aims to further confirm the success of the diagnostic test, is being done on a rolling basis. Those who are interested in participating should contact clinical research coordinator Anna Okumu.

In addition to diagnosing ME/CFS, the researchers are also harnessing the platform to screen for drug-based treatments, since currently the options are slim. “Using the nanoelectronics assay, we can add controlled doses of many different potentially therapeutic drugs to the patient’s blood samples and run the diagnostic test again,” Esfandyarpour said.

If the blood samples taken from those with ME/CFS still respond poorly to stress and generate a spike in electrical current, then the drug likely didn’t work. If, however, a drug seems to mitigate the jump in electrical activity, that could mean it is helping the immune cells and plasma better process stress.

So far, the team has already found a candidate drug that seems to restore healthy function to immune cells and plasma when tested in the assay. The drug, while successful in the assay, is not currently being used in people with ME/CFS, but Davis and Esfandyarpour are hopeful that they can test their finding in a clinical trial in the future.

All of the drugs being tested are either already approved by the Food and Drug Administration or will soon be broadly accessible to the public, which is key to fast access and dissemination should any of these compounds pan out.

Davis is a member of Stanford Bio-X, the Stanford Cancer Institute and the Stanford Maternal & Child Health Research Institute. Other Stanford authors of the study are research scientists Neda Nemat-Gorgani and Julie Wilhelmy and research assistant, Alex Kashi. The study was funded by the Open Medicine Foundation. Davis is the director of the foundation’s scientific advisory board. Stanford’s departments of Genetics and of Biochemistry also supported the work.