On 21 November, researchers from the Open Medicine Foundation (OMF) in America published a small but potentially important study that found reduced erythrocyte deformability in ME/CFS.

Update: The full paper has now been published and can be accessed via the link above (2nd January 2019).

“ME/CFS patients show normal arterial oxygen saturation but nothing much is known about microvascular perfusion. In this work, we tested the hypothesis that the erythrocyte deformability in ME/CFS is adversely affected, using a combination of biophysical and biochemical techniques.” 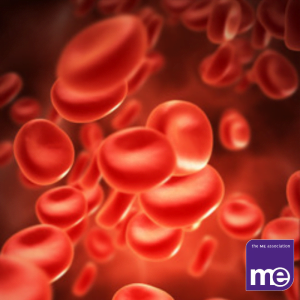 Prof. Ron Davis, one of the authors of the study, provided additional comment in an email from OMF sent at the time the abstract was released:

“Past work has looked primarily at the shape of red blood cells, which is difficult to quantitate. Our approach will give a clear quantitative number.

“It measures the ability of red blood cells to deform while squeezing into a capillary, something that blood cells must do for healthy flow.”

Although the study was very small, with only 9 ME/CFS patients and 9 healthy controls, Prof. Davis does not believe that this takes away from the significance of the results:

“We measure hundreds of cells from each patient, so, because of this, even though the number of patients is low, we get a very statistically significant distinction between patient and healthy cells’ deformability.” 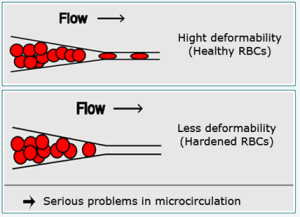 ‘Deformability’ refers to the ability of red blood cells to change shape.

Normally, red blood cells change their shape, from a round disc to an elongated oval shape, in order to pass into smaller capillaries.

This change in shape enables the continuous flow of blood (not slowed down by less blood cells being able to fit through at one time), in order to maintain optimum levels of oxygen supply to tissues.

What these results show is that the red blood cells of people with ME/CFS are not very good at deforming (changing shape) and so blood flow through small capillaries is reduced, which may lead to a shortage of oxygen supply to tissues.

Reduced blood flow has been suggested previously in ME/CFS pathology, particularly in relation to orthostatic symptoms and ME/CFS has also been described as a ‘state of hypoxia’ (shortage of oxygen to cells). This latest finding could help to explain many of the symptoms experienced.

Brenu et al. (a team that included Prof. Marshall-Gradisnik and Prof. Staines), measured erythrocyte characteristics in ME/CFS, including deformability, in 2010.

Contrary to the latest study from America, they concluded that there was no significant difference in deformability between patients and controls.

However, while the sample size was again very small, with only 6 patients studied against controls, it will be interesting to compare methodology when the full paper from the American study is published.

Oxidative stress has previously been suggested as a means of perpetuation in ME/CFS. This relates to an imbalance between the generation of reactive oxygen species (ROS), which can be toxic to cells, and the ability of the body to counteract or detoxify their harmful effects through neutralisation by antioxidants.

“It potentially could be a biomarker, and we are proceeding to design new devices that will make a clear distinction between patients and healthy controls.”

“These devices will be hand-held and easy to use by doctors in their offices, or in clinical testing labs.”

“We are putting our energy into developing the new devices as soon as possible.”

Another interesting point from the abstract – that we hope will be explained more thoroughly in the full paper – suggested that these findings were not found in people who were improving:

“Finally, preliminary studies show that RBCs from recovering ME/CFS patients do not show such differences in cellular physiology, suggesting a connection between RBC deformability and disease severity.”

“Our data demonstrates that the significant decrease in deformability of RBCs from ME/CFS patients may have origins in oxidative stress and suggests that altered microvascular perfusion can be a possible cause for ME/CFS symptoms.”

“Our data also suggests that RBC deformability may serve as a potential biomarker for ME/CFS, albeit further studies are necessary for non-specific classification of the disease.”

“These are clearly interesting preliminary findings from America that could also link in with the research on red blood cell shape that was published by Dr Les Simpson in New Zealand many years ago.”

“The number of recruits is clearly very small. So, we will need to have results from much larger numbers of people with ME/CFS (in various stages of illness and of differing illness severities) and confirmatory results from other independent research groups.”

“Also, I think we would need to see comparisons made with other groups of individuals (e.g. people with multiple sclerosis, rheumatoid arthritis, depression and sedentary populations) before coming to any firm conclusions about the validity of this finding and its possible use as a diagnostic biomarker for ME/CFS.”

Support the ME Association Christmas Appeal

If you would like to support our Christmas Appeal, then please:

If you have any questions about the Appeal, then please contact our fundraising manager, Helen Hyland. Thank you.