The scope report provides the framework for the review that the NICE guideline committee will follow during their deliberations. The initial draft scope has been revised and published and should now be regarded as final. 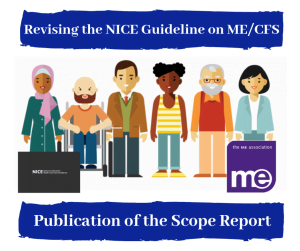 This followed stakeholder feedback on the draft report back in August.

You can read all the comments the draft report attracted, together with the responses from NICE, below:

As there is quite a lot of information to read, we felt it was best to publish it now before and if we make any comment ourselves.

It would seem from the documents now available on the NICE website, that certain members of the guideline committee have now been appointed. These include the chair and vice-chair and several core members like Dr Luis Nacal from the ME/CFS Biobank in his capacity as GP, as well as the important lay members.

We would like to take this opportunity to congratulate all members and wish them well in the task ahead. It is our hope that the revised ME/CFS clinical guideline will be a significant improvement over the current one.

Once the committee are all appointed, the process will continue with a new draft guideline expected in 2020. At that point, stakeholders will again have the opportunity to comment and influence the final clinical guideline. Until then, it’s a rather anxious period of waiting to see what they might come up with.

The NICE guideline is important as it does influence how patients are treated by the NHS. It affects those who present with suspected symptoms, the method of diagnosis and of testing, and the advice that patients and carers receive with regard to the all important management options.