ME Association Petition: The NICE guideline for CFS/ME is not fit for purpose… | 10 July 2017 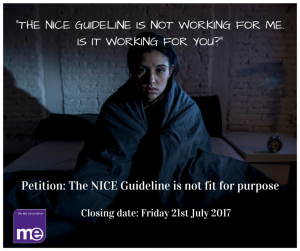 Update:
14.15pm 13th July 2017
We have extended the petition deadline to Friday 21st July at 5pm.
This follows the NICE decision to extend their own consultation deadline and because people with ME/CFS had asked for more time to share the petition and hopefully gain yet more supporters.
8,619 people have supported the campaign to date. Thank you all.

Update:
5.30pm 10th July 2017
When the petition had attracted 2,500 supporters earlier this afternoon, we emailed the following update to all our supporters and have similarly updated our followers on social media.

2,500 signatures on our petition at the time of writing! This is a tremendous achievement for so short a space of time. Thank you to everyone who has taken part and to those who have also gone to the trouble of leaving comments.

NICE contacted all stakeholders today confirming that “after considering the evidence and consulting with experts, we have provisionally decided not to update this guideline.”

We have been asked to consider their proposal (below) and respond by Friday 21st July at 5pm (slightly less time that we were expecting):
https://www.nice.org.uk/guidance/CG53/documents/surveillance-review-proposal

Dr Charles Shepherd, Hon. Medical Adviser to the ME Association, will be attending a Forward ME Group meeting tomorrow with the Countess of Mar and other ME/CFS charity representatives, when the NICE consultation will be discussed.

Over the next few days we will be considering our response and will of course keep you informed. In the meantime, please let others know about the petition and let them know why it is so important that we have a clinical guideline that actually works for people with this disease.

The ME Association has today launched a petition that aims to demonstrate to NICE (National Institute for Health and Care Excellence) that people with CFS/ME are not happy with the current guideline or the way in which the current review is being conducted.

Recently Dr Charles Shepherd learned that NICE were likely to recommend ‘no update’ to the current guideline. A two-week consultation begins today, but rather than it being part of a full review, it seems likely that NICE will be asking stakeholders to just comment on their ‘no update’ recommendation.

The ME Association has long held that the current guideline is not fit for purpose, and, especially in light of this recent news, many others appear to agree. We decided therefore that a petition might be a constructive way to demonstrate to NICE just how unhappy people were.

As well as adding your name to the petition – which we hope you will – you are also able to add any comments you feel appropriate. We have tried to express the main points of contention we have with the current guideline, and what we feel should be happening, but you may want to say something different.

The ME Association, along with other ME/CFS charities and support groups, are stakeholders in the guideline review process. We will let you know what the consultation is all about and how we are responding to it in a later blog, but in the meantime we will keep the petition open until Monday 17th July.

Dr Shepherd will aim to present the petition to the NICE committee for delivery to Sir Andrew Dillon (chief executive of the NICE guidance executive). It is our hope that even if the consultation does result in no update to the current guideline, NICE will be left in no doubt as to the feelings of those affected by M.E. and that we might then also use the petition in our other lobbying efforts.

9 thoughts on “ME Association Petition: The NICE guideline for CFS/ME is not fit for purpose… | 10 July 2017”