Last week, an inaugural review was published that presented a biomarker database initiative by EUROMENE, and will lead to better collaboration between ME/CFS research groups across Europe. The review also highlighted flaws in current research, suggested possible improvements, and drew attention to the significant lack of funding for ME/CFS research in general.

EUROMENE (The European ME network) is a collaboration of researchers and clinicians from 17 european countries who aim to promote cooperation and advance research on ME/CFS. They are funded by COST (European Cooperation in Science and Technology), a non-profit organization, and this initial study has established a database on all biomarker research relating to ME/CFS within Europe on which they hope future research will build.

Two members of EUROMENE are in receipt of grant funding by the ME Association’s Ramsay Research Fund. Dr Eliana Lacerda is a member of the UK ME/CFS Biobank team at London School Hygiene and Tropical Medicine and Dr Elisa Oltra from Spain is examining micro-RNA in PBMCs and exosome-enriched vesicles in people with severe ME/CFS.

Biomarkers; scientific highlighters
Biomarkers are measurable indicators of a disease state within the body, such as certain metabolites or specific genes, which can be used in diagnosis, classification of subtypes of disease, indicators of prognosis and in predicting response to treatment. A good example of a biomarker would be high blood pressure as an indicator of stroke risk.

The search…
The researchers conducted a vast search of publications on biomarkers from the last 5 years and compiled a total of 39 active ME/CFS studies from 17 different countries.

These studies were then grouped into four categories of biomarkers; Immunological, Infection-related, metabolic and neurological (See Fig. 1). The majority of biomarker studies at the moment seem to be focused mainly on immunological and metabolic markers.

Studies on immune markers explored immunoglobulins, autoantibodies and cytokines. Most of the studies on infection markers were focused on XMRV, confirming the absence of this virus in European ME/CFS cohorts. 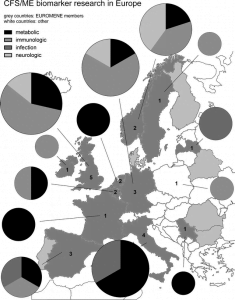 Through the magnifying glass
Most of the studies in this review were exploratory in design, so the number of patients used in each study was low and the control groups were often not properly matched by gender or age, which can have a significant effect on the results.

Some studies also reported inconsistent data, with some findings being reported in one study not able to be confirmed in others. Many of the biomarkers found showed alterations in subgroups of patients, and not in all patients, or had wide overlap with healthy control groups, so were not specific to ME/CFS patients. These subgroups of patients could be a result of differing disease onset (infection- versus non-infection triggered).

All of these reasons, along with the fact that only a few small studies have been carried out so far, could explain why no useful biomarker has been identified. Therefore, the study concludes, strategies are needed to improve the quality and comparability of these biomarker studies – Table 3.

The search is still on…
Although no single biomarker for diagnostic use has been identified, this project provides a platform for advancement of research and the improvement of future studies.

There were, however, some promising initial results which could later develop into something very exciting. Interestingly, metabolic studies consistently revealed different gender-related patterns, which could be an avenue of further exploration.

The writers suggest taking a broader approach – instead of looking for a single diagnostic biomarker – to analyse several different pathways together to create a palette of diagnostic markers.

The bottom line
This paper is a fantastic step in the right direction. EUROMENE are bringing ME/CFS researchers together across Europe to collaborate on key issues and are trying to set a higher standard of research – which is desperately needed – and it concludes with a very important message: that the main reason for the scattering of small studies is due to lack of funding.

“To promote research, it is crucial to increase funding for ME/CFS, which is currently still far below the budget funds for most other serious diseases in both the EU and the US funding agencies, such as the National Institutes of Health (NIH)”

You can read the full paper which provides a breakdown of all the published research that has been included in the database, here.