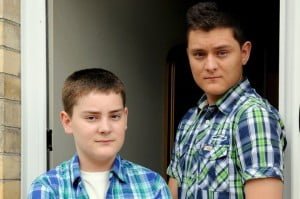 Arron and Lewis Sleep were referred to social services

From The Sunday Times, 28 September 2014. Story by James Gillespie.

UP TO 40 families have been investigated by child protection officers because they disagreed with doctors about the diagnosis and treatment of children with myalgic encephalopathy (ME), also known as chronic fatigue syndrome, according to a leading paediatrician.

Nigel Speight, a paediatrician and adviser to the Tymes Trust (The Young ME Sufferers Trust ), said: “I know of 35 to 40 families abused in this way. I am getting more cases all round the country. It is easy to blame the social workers but I blame the doctors. If the doctors got it right, the social workers wouldn’t be involved.

“Doctors are failing to diagnose ME, through neglect, ignorance or cold feet because it is controversial. There are perfectly good Nice [National Institute for Health and Care Excellence] guidelines telling every GP how to diagnose it.”

About 250,000 cases of ME have been diagnosed in Britain, 25,000 of which are children. Symptoms include insomnia, debilitating exhaustion, joint and muscle pain, stomach problems and poor memory.

Sophie Sleep, of Lipson, Plymouth, said her two sons, Lewis, 18, and Arron, 14, who suffer from ME, were referred to social services “behind her back” in March 2011. She was accused of suffering from Münchausen’s syndrome by proxy, where a parent invents an illness in their child.

Sleep said that during a doctor’s appointment, they were told if they did not follow recommendations “then possibly it would go down the child protection route”.

Doctors wanted to admit Lewis, whose condition had worsened despite being put on an exercise regime, to hospital for physiotherapy and to monitor his sleeping, but his parents believed both could be done at home. “You want the best for your children. It’s not being obstructive or difficult,” said Sleep, who was visited by social workers in May 2011. “It was very stressful. It was awful. We are all still very raw from the experience.”

Social services eventually decided that Sleep’s sons were not at risk and she did not suffer from Münchausen’s.

In another case, Coby Lord, 13, from Barnoldswick, Lancashire, was referred to an ME facility in Liverpool against the wishes of his family, who thought the unit took too much of a psychiatric approach. Social services were alerted and the family feared he would be taken into care.

His mother, Louise Lord said: “It was horrendous; we didn’t sleep for months. They were accusing me of making up the illness.”

Social services concluded there was no risk to Coby.

Matthew Tomlinson, Lancashire county council’s cabinet member for children, young people and schools, said: “If our children’s services are informed of concerns about the wellbeing of any child . . . they are legally obliged to look into them. Our staff handle inquiries as sensitively as possible.”

Plymouth city council said: “Our advice and assessment service screens referrals and where a young person or child is considered ‘in need’ we carry out an assessment to help identify resources to meet those needs.”