To PEM or not to PEM? That is the question for case definition | Research 1st website | 27 April 2012

From the CFIDS Association of America’s Research 1st website, 27 April 2012

By Leonard A. Jason, Ph.D. and Meredyth Evans
DePaul University

The criteria for defining cases is an important topic in research and medicine. For chronic fatigue syndrome, it has been a vexing topic whether one considers CFS to be a new condition identified with the 1988 case definition (Holmes, et al.) or a new (if unwanted) name for a condition that has existed for decades, if not centuries, by other names. Here we will examine the cluster of symptoms known as post-exertional malaise (PEM) and its importance in defining the condition. PEM is also known as post-exertional relapse. It refers to the aggravation of various symptoms following even modest physical or mental exertion. (Editor’s note: Please see our series of articles on PEM by Jennifer M. Spotila, J.D., posted at http://bit.ly/pem-series) 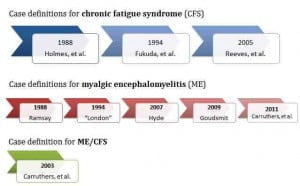 The Fukuda et al. (1994) criteria as well as the empiric criteria (Reeves et al., 2005) for CFS do not require post-exertional malaise (PEM) to occur in all patients, rather PEM is one of eight symptoms, of which only four are required. However, according to a recent review article by Jason et al. (2012), the initial myalgic encephalomyelitis (ME) case definitions required PEM as an essential feature of this illness including Ramsay’s case criteria (Ramsay 1988), the London criteria (National Task Force Report on CFS/PVFS/ME, 1994), the Nightingale criteria (Hyde, 2007) and the Goudsmit et al. criteria (2009). Most definitions for ME note the characteristic delay in recovery of muscle strength after exertion ends. For example, Ramsay (1988) describes it as muscle fatigability that results from a minor degree of physical exercise with which three or more days elapse before full muscle power is restored. The London criteria criteria (National Task Force Report on CFS/PVFS/ME, 1994) suggest that post-exertional malaise is precipitated by physical exertion, but also add the component of mental exertion as a precipitator of post-exertional malaise. The London criteria also suggest that exercise-induced fatigue should be relative to the patient’s previous exercise tolerance, but there is no specific time period for which full muscle power should be restored. The Nightingale criteria states that post-exertional malaise can be precipitated by both mental and physical activity; post-exertional malaise is defined as pain with rapid loss of muscle strength after moderate physical or mental activity, but also suggests that post-exertional malaise might be due to vascular dysfunction or peripheral nervous or spinal dysfunction (Hyde, 2007). Goudsmit et al. (2009) describes post-exertional malaise as a new onset of abnormal levels of muscle fatigability that is precipitated by minor levels of activity with symptoms getting worse during the next 24 to 48 hours. Our group (Jason et al., 2012) has recently tried to operationalize the ME criteria from Ramsay (1988), Hyde (2007), Goudsmit et al. (2009), and the “London” criteria mentioned in the National Task Force Report on CFS/PVFS/ME (1994).

In addition, the ME/CFS Canadian clinical case definition also required post-exertional malaise for diagnosis (Carruthers et al., 2003), and our group has tried to operationalize these criteria (Jason et al., 2012). This ME/CFS case definition has since been revised, and the recent ME-ICC criteria (Carruthers et al., 2011) require a person to have Post-Exertional Neuroimmune Exhaustion, which is characterized as marked, rapid physical and/or cognitive fatigability in response to exertion.

Many explanations for the effects of PEM have been offered, such as Dowsett et al. (1990) and Myhill, Booth, and McLaren-Howard’s (2009) suggestion of mitochondrial damage and/or inhibition of the oxidative metabolism, and Jammes, Steinberg, Mambrini, Brégeon, and Delliaux (2005), Pall (2007) and Twisk and Maes (2009) suggestion that PEM is a consequence of excessive (prolonged) oxidative stress after exertion. Research has yet to identify a single factor that can adequately explain the patient experience.

Exercise scientists have used standard bouts of acute exercise in attempts to better characterize the physiological experience of post-exertional malaise. Both maximal and sub-maximal exercise have been used within the ME/CFS population. For maximal exercise tests, participants are instructed at a prescribed rate (e.g. 60-70 revolutions per minute (rpm)) against a gradually increasing resistance to voluntional exhaustion or until the participant can no longer pedal at the prescribed rate (Cook et al., 2006). Standard criteria for peak effort are normally applied. For example, peak effort would be determined when participants meets two of the following four criteria as set by the American College of Sports Medicine (ACSM): a respiratory exchange ratio (CO2/O2) of at least 1.1, a change in oxygen consumption (VO2) of less than 200 ml with increasing work, achievement of 85 percent of age-predicted heart rate, and a rating of perceived exertion (RPE) of 17 or higher out of a total 20 on the Borg 6–20 category scale (Borg, 1978). Maximal exercise tests, when combined with metabolic measurement, are considered the gold standard for assessing an individual’s maximum oxygen consumption (VO2max) or aerobic fitness. Maximal exercise tests are brief (between 5-9 minutes in individuals with CFS) (Noonan & Dean, 2000), and repeated maximal exercise tests have been used in novel ways to demonstrate cardiorespiratory and metabolic differences between CFS/ME patients and healthy controls (VanNess, Stevens, Bateman, Stiles, & Snell, 2010). It should be noted that the measurement is only considered to be valid when a participant is able to reach a VO2max without succumbing to fatigue or musculoskeletal issues first, which can occur in a disabled population. Furthermore, completion of the maximal exercise tests, particularly when repeated over two days, involve a high level of motivation by the participant, and these procedures require specific equipment and trained professionals.

In comparison with maximal tests, submaximal tests can be used to predict aerobic capacity and determine the cardiorespiratory and symptom responses to exercise over longer durations (e.g., 25-30 minutes) compared to the maximal exercise test. Thus, rather than giving one all-out effort, the patient is asked to sustain a certain level of effort for a prescribed period of time. There are many different protocols for submaximal testing (see Noonan & Dean, 2000). An excellent example is the work conducted by Light and colleagues’ (2011) in their work on gene expression in response to exercise in individuals with ME/CFS and FM. Light and colleagues used a moderate “whole-body” test that required participants to increase their pedaling on a stationary bicycle until they were able to exert 70% percent of their age-predicted maximum heart rate. This level of exertion was then maintained for the next 20 minutes of the test. Submaximal tests are used by some researchers studying disabled populations such as ME/CFS due to the belief that they have higher generalizability with the natural level of exertion necessary for eliciting a deterioration of symptoms. In fact, Light and colleagues have found that their 25-minute submaximal exercise tests elicited a worsening of fatigue and pain symptoms in individuals with ME/CFS from 8 to 48 hours after exercise (2011). Post-exertional malaise can potentially be measured by increases in the expression for sensory, adrenergic and immune genes following moderate exercise (Light, White, Hughen, & Light, 2009).

It is important to note that PEM cannot be definitively established without the inclusion of the patients’ self-reported symptoms. Thus, there is a need to develop self-report methods for capturing the frequency, severity and duration of this cardinal symptom. Jason and colleagues (1999) found that in a group of individuals with ME/CFS, PEM ranged from 40.6-93.8% depending on how the question of this symptom was asked. This lack of uniformity in the way PEM is measured represents a significant problem for the scientific community studying this illness.

Dead, heavy feeling that occurs quickly after starting to exercise;
Next day soreness or fatigue after non-strenuous, everyday activities;
Mentally tired after the slightest effort;
Physically drained or sick after mild activity; and,
Minimum exercise makes you physically tired.

In another study, the above five PEM items from the MFTQ were confirmed as having the best diagnostic sensitivity and specificity (Jason, Evans, Brown, et al. 2011). The MFTQ PEM factor is distinct for patients with ME/CFS from the Emotional Distress factor of the Profile of Fatigue-Related Symptoms (Ray et al., 1992), which measures mood states such as depression, anxiety, and anger. In addition, as another indicator of construct validity, the Fatigue Severity Scale (Krupp et al. 1989), a measure of the impact fatigue has on one’s functional ability, demonstrated stronger relationships for the MFTQ Post-Exertional factor in the ME/CFS group than the control group. These five PEM items have been included in a new diagnostic measure: the DePaul Symptom Questionnaire (DSQ), developed by our group at DePaul University to help classify people with all the major case definitions, and we currently are collecting data using this instrument.

Twisk F, Maes M (2009). A review on Cognitive Behavorial Therapy (CBT) and Graded Exercise Therapy (GET) in Myalgic Encephalomyelitis (ME)/Chronic Fatigue Syndrome (CFS): CBT/GET is not only ineffective and not evidence–based, but also potentially harmful for many patients with ME/CFS. Neuroendocrinology Letters, 30(3), 284–99. 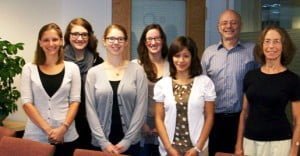 Leonard Jason, Ph.D., is the director of the Center for Community Research at DePaul University. He has been involved in ME/CFS research since 1990 and has published 219 papers on the topic, many of which address the issue of case definition and other epidemiologic issues. Dr. Jason is second from the right in this photograph of the CFS Research Team, part of the Center for Community Research.

One thought on “To PEM or not to PEM? That is the question for case definition | Research 1st website | 27 April 2012”